France and Flanders 2017
​Day 10: Omaha Beach &
​​arromanches 1944
"It's okay to be uncomfortable and to need to take time to fully understand." 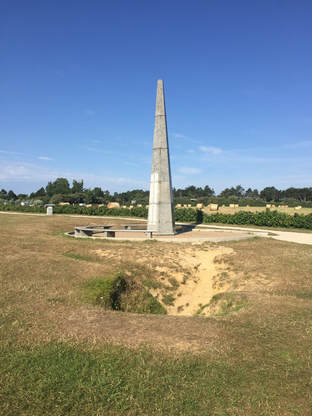 Located a short distance from the American cemetery and above Omaha Beach, the Memorial Obelisk commemorates the 1st US Infantry Division
Today we continued work on the inquiry-based project that we began yesterday. While interrogating sites, syndicate members worked collaboratively to determine what Big Ideas and Powerful Questions to include in their operational plans.

We began the day in the American sector of the D-Day invasion. Before syndicates dispersed to explore Omaha Beach and the Normandy American Cemetery and Memorial, we considered different aspects of maps.

Following our investigation of Omaha Beach and our interrogation of the American memorial site, we drove to Arromanches, which is located in the British sector of the D-Day invasion. We spent about two hours in Arromanches enjoying the local cuisine and investigating the remnants of D-Day, including the famous artificial "Mulberry Harbour."

Our final structured activity of the day was Emily's seminar, which focused on battles and the effects of the Normandy Campaign on France's identity.

Before returning to the Moulin Morin, we had the opportunity to shop in Bayeux and visit the Tapisserie de Bayeux (Bayeux Tapestry), which is among UNESCO's memories of the world.

When we returned to the Moulin Morin, syndicates worked to complete their operational plans, which they will be presenting tomorrow morning.

When we arrived at Colleville-sur-Mer, Lee set out multiple maps of Normandy. He then posed the following questions:​After giving us a few minutes to analyze the maps, he explained that it is important for military historians, teachers, and students to acquire and study different maps of the same historical event. He expanded on this by saying that each map depicts a certain historical perspective and promotes a certain narrative. He informed us that for individuals to investigate an event and develop their own narrative, they must study maps from different armies and different organizations' perspectives.

Blake explained that scenes from Steven Spielberg's Saving Private Ryan can be used as vehicles to further students' inquiry learning. He advised us of two specific scenes, both of which can be viewed in the YouTube clips below.

In the classroom, learned helplessness occurs when students feel powerless. This powerlessness often leads to avoidance and feelings of failure. Blake shared that in order to prevent students from developing learned helplessness, teachers must empower their students. In other words, teachers must value their students' voice and give students the opportunity to work independently and take charge.

The Normandy American Cemetery and Memorial 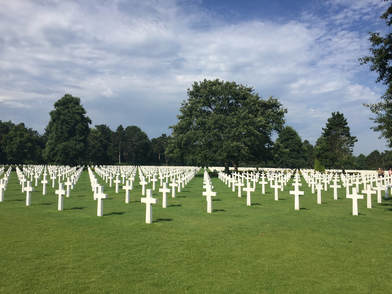 The American Cemetery in Normandy consists of rows of white crosses
The Normandy American Cemetery and Memorial is located at Colleville-sur-Mer. It replaced the temporary American St. Laurent Cemetery that was developed there in 1944 immediately following the D-Day invasion. According to the American Battle Monuments Commission's website, "[t]he memorial consists of a semicircular colonnade with a loggia at each end containing large maps and narratives of the military operations; at the center is the bronze statue, 'Spirit of American Youth Rising from the Waves.' An orientation table overlooking the beach depicts the landings in Normandy. Facing west at the memorial, one sees in the foreground the reflecting pool; beyond is the burial area with a circular chapel and, at the far end, granite statues representing the United States and France."

Andrew and Riley shared their experiences while visiting the Normandy American Cemetery and Memorial:

Is it necessary for Canadian students to learn about other nations' experiences on D-Day?

Blake asked us to consider whether it is necessary for Canadian students to study the American (and British) troops' experiences on D-Day. Zakk shared his thoughts:

Before leaving Arromanches, Emily conducted a seminar. After posing the questions below, she facilitated a large-group discussion.