France and Flanders 2017
​Day 12: Verrières ridge 1944
"What context do we miss when we only teach students about D-Day?" 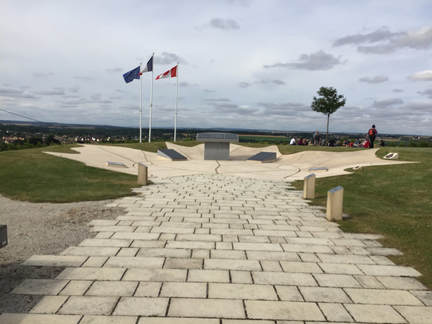 The memorial at Point 67 - Verrières Ridge
Today we visited sites south of Caen pertinent to an unknown part of the Normandy Campaign: the Battle of Verrières Ridge.

Our day began at Point 67 - Verrières Ridge, where there is a memorial that commemorates the Canadian units that struggled for Verrières Ridge in July and early August 1944. Before interrogating the site, Cindy guided us through an inquiry-based learning activity involving photographs. Following our investigation of the Point 67 memorial and look-off, Lee explained the historical significance of the Battle of Verrières Ridge.

Our second stop of the day was the village of Verrières. Specifically, we visited a church in front of which stands a memorial that commemorates the Royal Hamilton Light Infantry. While at Verrières, we discussed a few key aspects of history education. We then drove to Point 122, another significant site in the Normandy Campaign. While at Point 122, Blake assigned us our final group project, which involves syndicates designing a monument.

From Point 122, we drove to the Bretteville-sur-Laize Canadian War Cemetery where Lori, Emily, and Cindy presented their soldier biographies. After the presentations, Simon led a seminar during which we discussed the ethics surrounding the murders of innocent people during wartime.

When we returned to the Moulin Morin, we shared a communal dinner that has come to be known as the Chow Dinner. 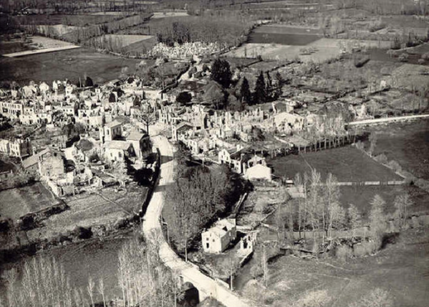 This photograph depicts Oradour-sur-Glane after the SS torched the town and assassinated hundreds of its civilians in summer 1944
While we were at Point 67 - Verrières Ridge, Cindy led an inquiry-based learning activity, demonstrating how we can use photographs as jump-off points for controversial debates.

Cindy showed us two photographs taken during the latter days of the Battle of Normandy. She then posed a few Powerful Questions to guide our analysis of the images:
After giving us a few minutes to study the photographs, Cindy explained that one photograph is an aerial shot of Caen following the July 1944 bombings of the city. She then interpreted the second image, explaining that it depicts Oradour-sur-Glane, a town in west-central France that was never rebuilt following the 10 June 1944 massacre of its civilians by a unit of the 2nd SS Panzer Division Das Reich. She also informed us that the photograph of Oradour-sur-Glane was taken by the Germans.

Cindy concluded the activity by explaining that it is essential for teachers and students to question and research where the images they use as evidence come from. 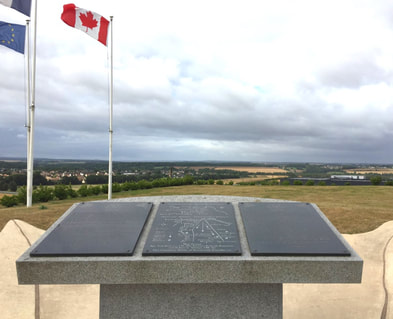 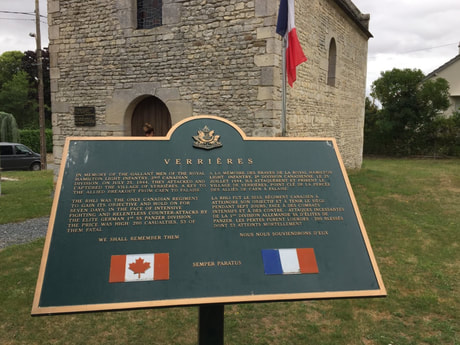 This plaque commemorates the Royal Hamilton Light Infantry, the regiment that captured Verrières from the Germans in July 1944
During our stop in the town of Verrières, Blake shared some important points about history education:

Should teachers express their biases?

Today we discussed briefly whether teachers should share their biases or whether they ought to remain neutral. Lynzee, a teacher, and Marshall, a student, shared their thoughts on this matter: 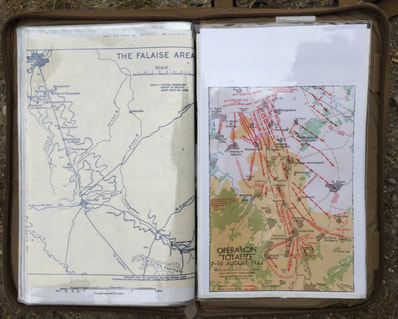 Point 122 is located along the 1944 Caen-Falaise Road. When we arrived at Point 122, Lee shared some evidence-based information about the historical significance of the site:

The divisions of the 2nd Canadian Corps came together for the first time during the Second World War to fight at Point 122. They were joined by the 51st Highland Division, whose troops also fought under Canadian command. The troops fighting at Point 122 employed sophisticated and innovative military tactics such as heavy bombers and multinational/multilingual operations.

Thanks to the Canadians' significant contributions during the fighting at Point 122,  Canada became an independent party in the United Nations (UN) and in the North American Treaty Organization (NATO).

While we were at Point 122, Blake pointed out that there is no national monument to commemorate Canada's experiences in the Second World War. He subsequently challenged syndicates to design a national monument. He reminded us that we must consider several components:

Over the past twelve days, we have visited many Commonwealth cemeteries. Following our visit to the Bretteville-sur-Laize Canadian War Cemetery, Abbi and Marshall compared and contrasted First World War and Second World War CWGC cemeteries.

Before leaving the Bretteville-sur-Laize Canadian War Cemetery, we gathered together for Simon's seminar. After posing the question Can war justify the murder of innocent people such as civilians?, Simon engaged us in a large group discussion.