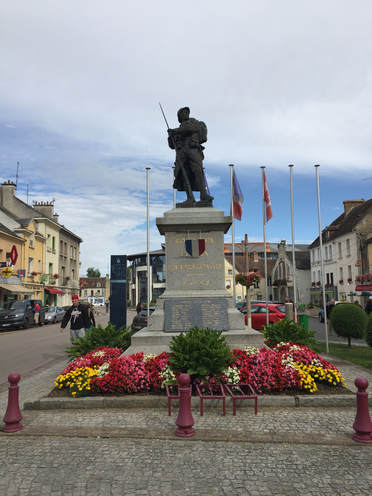 The cenotaph in Trun
This morning we bid adieu to the Moulin Morin. After packing our kit into the vans, we began our drive back to Paris. Before returning to France's capital, however, we made a few stops to discover and discuss possible responses to the Powerful Question How do you close off a military campaign?.

Our first stop was Trun, where we picked up lunch supplies and examined the town's cenotaph. Framed by the flags of France and Canada, the cenotaph lists the names of the townspeople who fell during the First World War and the Second World War.

Following our visit to Trun, we drove to the Trun-Chambois Gap Memorial, which is located in St Lambert-sur-Dives and commemorates the closing of the Falaise Gap between 18 and 22 August 1944. After a brief discussion about the Canadians' role in closing the Falaise Gap, we walked to a nearby monument that commemorates the Canadian Victoria Cross winner Major David Vivian Currie of the South Alberta Regiment.

Our second last stop before heading to Paris was the Mémorial de Montormel (Memorial of Montormel), which is located where the final phase of the closing of the Falaise Gap took place. Before we began our drive back to Paris, we stopped at Montormel where syndicates presented the designs that they had selected for Canada's national Second World War Memorial.

​After lunch, we drove to the Mercure Convention hotel where we all met two weeks earlier. Upon our arrival in Paris, we said our goodbyes and went our separate ways. Some participants rested at the hotel while others went into downtown Paris for the evening. 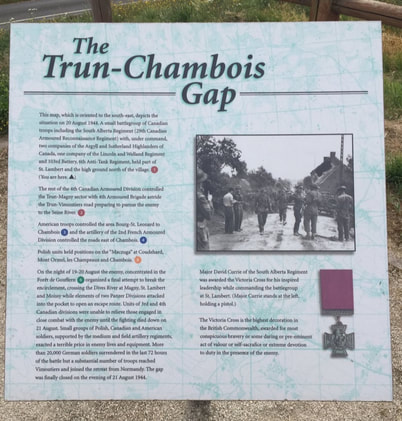 This information plaque at the Trun-Chambois Memorial explains the closing of the Falaise Gap
When we arrived at the Trun-Chambois Gap Memorial, Lee explained that the closing of the Falaise Gap in August 1944 is even more contested than the Normandy Campaign. He also shared the two narratives that dominate the debate:
After his brief explanation, Lee posed the Powerful Question How do you end a military campaign?. After giving us a few minutes to consider possible responses, he proceeded to explain that there are many factors that result in the ending of military campaigns, including a significant loss of life and the achievement of short- and/or long-term goals. He also shared that there are many steps that armies must take to end campaigns.

Before giving the floor over to Cindy, Lee asked a few more Powerful Questions:
​Before leaving the Trun-Chambois Gap Memorial, Cindy reminded us that the end of a campaign is also the beginning of the civilians' reconstruction process. She also mentioned that even today, French civilians have difficulty forgiving those who occupied their towns.

Reflections on the End of the Normandy Campaign 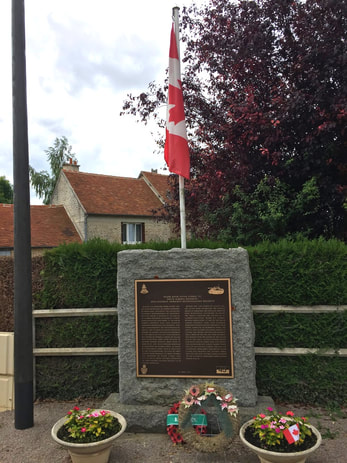 This memorial commemorates Major David Vivian Currie, VC
Simon and Zakk were invited to reflect on the question What does it take to end a campaign and how does a campaign help win a war?​:

The Polish Mémorial de Montormel commemorates the Americans, British, Canadians, French, and Polish who fought alongside one another to close the Falaise Gap in August 1944. The site, which overlooks the Vallée de la Dives (Valley of the Devine Ones), includes a stone memorial wall, army vehicles, information panels, and a museum dedicated to explaining the Allies' effort to close the Falaise Gap. 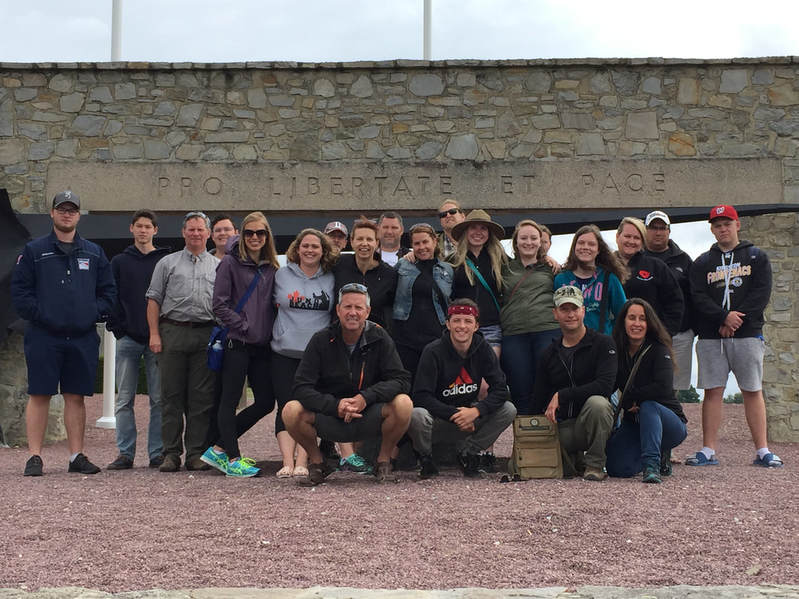 This final group photo was taken at the Mémorial de Montormel. PRO LIBERTATE ET PACE means FOR LIBERTY AND PEACE.

Teaching Students About the Battle of Normandy 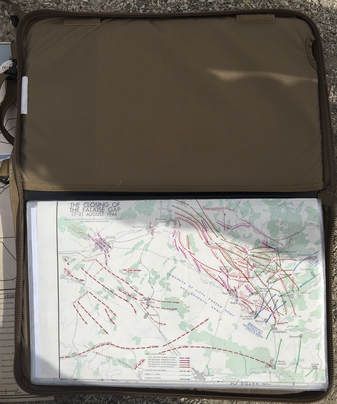 Throughout the week, Blake, Cindy, and Lee asked us to consider the following question: ​Is it important to teach students about Canada’s experiences on D-Day or Canada's experiences throughout the Normandy Campaign?.

Riley and Simon shared their responses to this question: