"How do we determine what is historically significant?" 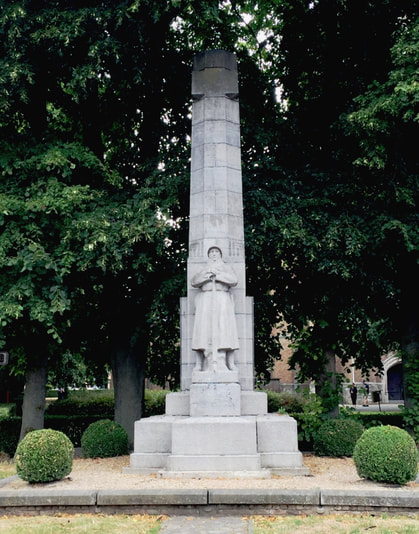 Langemarck's cenotaph
Today we learned about the historical significance of Canada's experiences in the Ypres Salient between 1915 and 1917.

We began our day in the town of Langemarck where we shared our responses to the question that Cindy posed yesterday: Given the German and British objectives in 1914, what did these countries need to consider with regards to the Belgian and French civilians living on the Western Front?. Following this, we explored the town's main square, which is home to a church, a cenotaph, and information plaques.

Our next stop was the Langemarck German Military Cemetery where we discovered and explored the newly-installed Poppy Cenotaph and considered the purpose of the German cemetery.

We then drove to Vancouver Corner where we considered the intent of the St. Juliaan/St. Julien Canadian Memorial (also known as the Brooding Soldier). We also pondered why the monument was erected at this specific spot. After our analysis of the monument, Lee shared his views of why the Second Battle of Ypres is historically significant. Following this, we visited the Hill 62 (Sanctuary Wood) Canadian Memorial where we received maps and completed a map activity that involved us determining our exact location in the Ypres Salient. Lee also taught us about the Canadians' contributions to the Battle  of Mont/Mount Sorrel.

The next stop on the tour was the Passchendaele Canadian Memorial at Crest Farm. The cube monument located there commemorates Canada's experiences during the Third Battle of Ypres, which is more commonly known as Passchendaele. While at Crest Farm, we gained insights into the final major battle in the Ypres Salient. After leaving Crest Farm, we visited two cemeteries - the Passchendaele New British Cemetery and the Wieltje Farm Cemetery - where Robert and Alexander presented their soldier biographies.

When we returned to our hotel, Ronda conducted her seminar, which was related to memorials and monuments. We then had the opportunity to visit the In Flanders Fields Museum.

​At the close of the day, we attended the Last Post Ceremony at the Ypres (Menin Gate) Memorial. Before returning to our hotel, Joel shared with us the life of the soldier he researched, who is one of 55,000 individuals commemorated on the Menin Gate.

Given the German and British objectives in 1914,
what did these countries need to consider with regards to
​the Belgian and French civilians living on the Western Front?

"A lesson does not need to be wrapped up in a bow."

At the beginning of the day, Blake explained that it is not necessary to include wrap-ups at the end of lessons. He advised that if teachers leave lessons open-ended, students have the opportunity to mull over different perspectives, and this might enable them to come to a resolution on their own.

Key Points to Consider About the First Use of Poison Gas

While at Vancouver Corner, Lee led a discussion about the Second Battle of Ypres. We learned that poison gas was introduced as a weapon of war during the first days of this battle, on April 22, 1915 and April 24, 1915. Cindy also informed us that international law actually existed regarding the the use of poison gas and that the law was signed by many nations. She further explained that the 1907 update of the Hague Convention's primary document stated that it was against law to launch projectiles of poison gas.

At the Second Battle of Ypres, the German Army did not use projectiles. Instead, they used huge canisters of gas and relied on winds to carry the gas over No-Man's-Land to the Allies' trenches. Did the Germans break the law?.

The Significance of Terrain 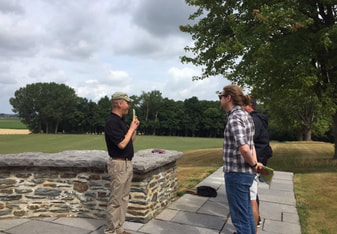 We also discussed the importance of teaching students how to study the terrain in order to determine the reasons behind battles. Before leaving Mont/Mount Sorrel, we completed a map reading activity that can be used to teach both map reading skills and First World War history.

At the end of the tour, Ronda reflected on what terrain can tell us during inquiry-based learning activities:

Upon returning to our hotel, Ronda guided us through a large group discussion about memorials and monuments. Throughout the discussion, she probed us for possible answers to the questions below: 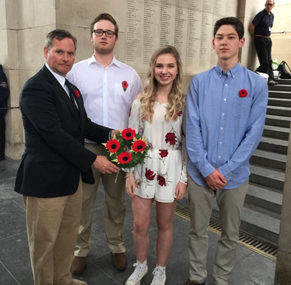 (From left) Joel, Alex, Emily, and Andrew
This evening we attended the Last Post Ceremony at the Ieper/Ypres (Menin Gate) Memorial, which lists the names of 55,000 Commonwealth soldiers who went missing in action in Belgium during the First World War. With the exception of May 20, 1940 - September 6, 1944, the Last Post Ceremony has been held at the Menin Gate at 8:00pm every night since November 11, 1929.

Alex, Andrew, Emily, and Joel laid a wreath at the Memorial on our group's behalf.