France and Flanders 2017
​Day 11: Operation overlord 1944
"We must question everything that is delivered to us." 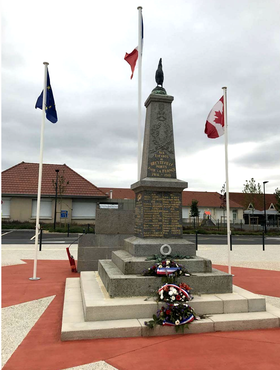 Our day began in the classroom where syndicates presented their operational plans for Operation Overlord. Following the presentations, syndicates received copies of orders, maps, and air photographs issued in 1944. Lee then introduced our next activity: a Tactical Exercise Without Troops (TEWT). After he gave us an intelligence brief, syndicates quickly got into the vans. We spent the next hour or so stopping at various landmarks such as churches and railways to get a sense of the ground.
​
At the conclusion of the TEWT, we drove to Bretteville and settled into a coffee shop. Over the next hour, syndicates used the observations that they had made during the TEWT and the primary research documents that they had received at the Moulin Morin to prepare a battalion-level defence plan. At the end of the work period, syndicates came together and presented their defence plans to the whole group.

Our day continued with a visit to the Abbaye d'Ardenne (Ardenne Abbey), a Second World War memorial that commemorates twenty Canadians who were executed by the 12th SS Panzer Division during the first days of the Normandy Campaign. While at the Abbaye d'Ardenne, we explored the buildings, the museum, the abbey's gardens, and the memorial to the twenty assasinated Canadians. We also considered a question posed by Cindy: What was at stake for the Germans?​.

Our day ended at the Bény-sur-Mer Canadian War Cemetery. After Simon, Janelle, Ben, and Andrew presented biographical sketches of the soldiers they had researched, Lorelei guided a group discussion about integrity and empathy during periods of war. 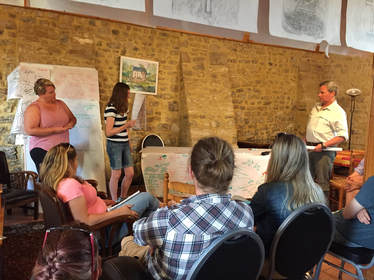 Chart paper and markers are teaching supplies that lend themselves to both whole-class discussions and small group work. These simple tools allow students to write down and draw out their ideas and questions for everyone to see. The mind maps become living documents that can be added to over time.

Also important to note is that the mind maps become a record of learning and can be used to assess students' knowledge and skill development. As well, teachers can use the Big Ideas, Historical Thinking Concepts, and Powerful Questions that their students write down to plan for future lessons and projects. 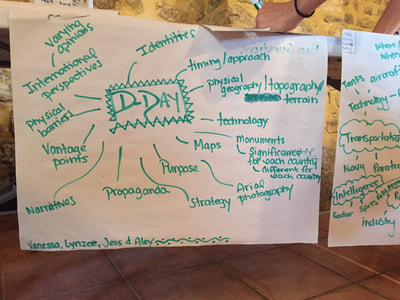 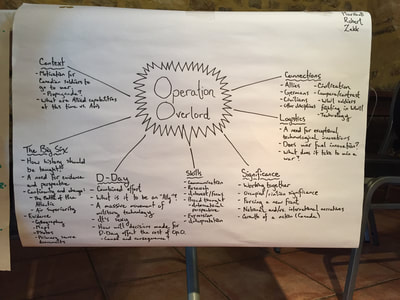 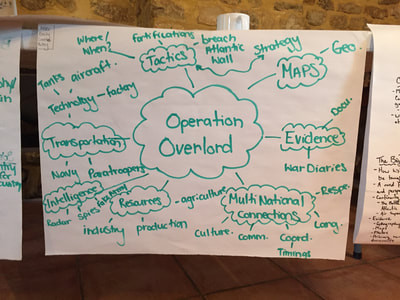 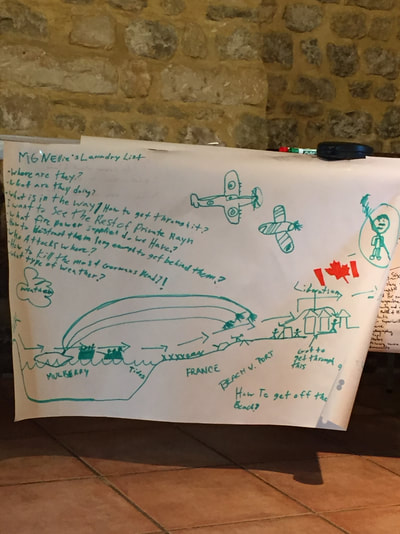 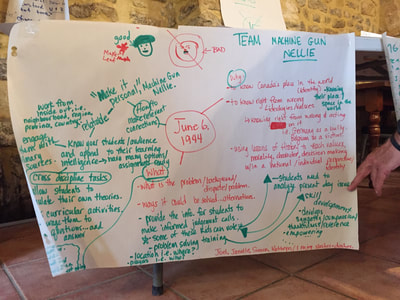 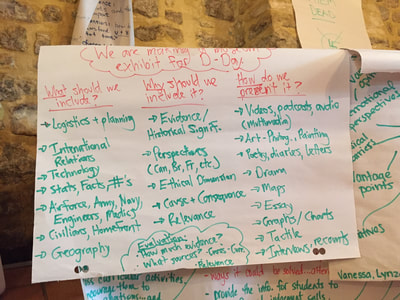 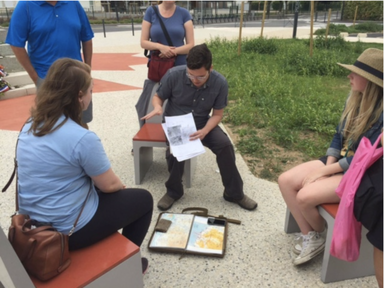 (Clockwise from left) Abbi, Riley, and Emily present their syndicate's defence plan
The tactical exercise that we participated in today is an example of an authentic problem solving activity. After syndicates presented their defence plans, Blake explained that it is essential for teachers to engage their students in authentic problem solving activities because such exercises are skills-driven and collaborative in nature. As well, they enable students to analyze different historical perspectives, wrestle with ethical dilemmas, and work with primary source evidence.

As a large group, we brainstormed how teachers can bring the same tactical exercise that we completed - or a similar activity - into the walls of their Canadian classrooms:
A few participants also pointed out that to engage their students in other authentic problem solving activities, teachers can ask their students to solve problems that their own municipal government and neighbours resolved. 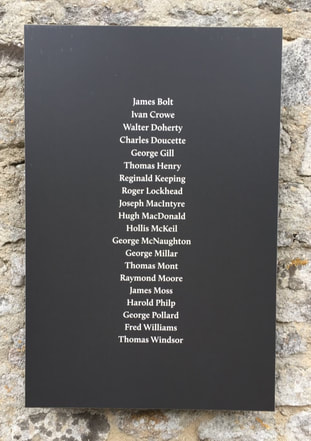 This plaque commemorates the twenty men who were executed at the Abbaye d'Ardenne on the 7, 8, and 17 June 1944
The Abbaye d'Ardenne, which consists of multiple medieval buildings, a memorial park, a museum, and gardens, is historically significant because twenty Canadian Prisoners of War were murdered onsite on the 7, 8, and 17 June 1944 by a Hitler Youth Division, the 12th SS Panzer Division. The twenty Canadians all belonged to the North Nova Scotia Highlander Regiment; the 27th Canadian Armoured Regiment; and the Stormont, Dundas and Glengarry Highlander Regiment. The Royal Regina Rifles liberated the Abbaye d'Ardenne on 8 July 1944.

When asked for their thoughts on the Abbaye d'Ardenne, Emily and Mike reflected on the events that took place there:

What was at stake for the Germans?

Before we disperse to investigate the Abbaye d'Ardenne, Cindy posed the question What was at stake for the Germans?.

​Following our visit to the Abbaye, Marshall and Zakk shared their responses to Cindy's question.

At the end of our visit to the Bény-sur-Mer Canadian War Cemetery, Lorelei facilitated a seminar. She posed the following two questions: ​After she asked her questions, she guided us through a large-group discussion.