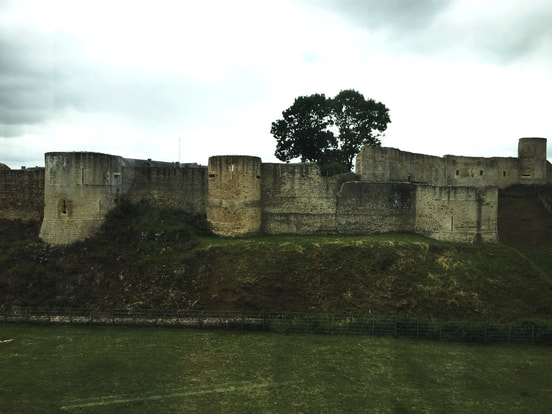 William the Conqueror's castle from the Mémorial des civils dans la guerre
Today we began considering how to end a campaign that has consequences and is a turning point in war.

We began our day just up the road from the Moulin Morin at the Sully Churchyard, which houses one Commonwealth war grave. While there, Lee posed a few Powerful Questions for us to think about throughout the day. He also shared with us the story of  J.P. Noble, the Commonwealth soldier commemorated in this French churchyard.

​After paying our respect to Noble, we drove to Falaise through the Canadian Second World War battlefield, which consists of a series of ridges that have become known as the Stairway to Hell. While in Falaise, we had the opportunity to visit William the Conqueror's castle (the Châtea﻿u de Falaise)﻿ and the Mémorial des civils dans la guerre (Civilians in Wartime Memorial).

Our next stop of the day was the Urville-Langannerie Polish War Cemetery. While there, we reflected on how the Polish commemorate their war dead. Before leaving the cemetery, Lynzee facilitated a seminar on a topic that we had started discussing earlier in the day: how to create a safe learning environment.

After leaving the Polish cemetery, we drove to Rocquancourt, a French village that was at the centre of Operation Totalize and consequently, was almost completely destroyed during the Second World War. Rocquancourt's mayor, Denis Viel, and the townspeople welcomed us warmly and invited us to join them for apéritifs. We left Rocquancourt two hours later with a deeper appreciation for and understanding of French culture and French civilians' wartime experiences.

When we returned to the Moulin Morin, we packed our suitcases in preparation for our departure tomorrow.

A Headstone With Many Questions 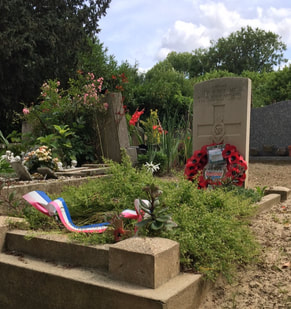 J. P. Noble's grave
When we arrived at Sully Churchyard, Lee drew our attention to a Commonwealth war grave inscribed with the name J. P. Noble. He then posed the two Powerful Questions below and gave us a few minutes to explore the churchyard. When we came together a few minutes later, Lee shared some research that he had conducted regarding J. P. Noble’s life:

The sole Commonwealth war grave in Sully Churchyard commemorates Captain John Padmore Noble, a British Forward Observation Officer (FOO) and gunner who fought with the Royal Horse Artillery during the Second World War. In August 1944, while helping the 50th British Division close the Falaise Gap with the Americans, Noble drove his artillery onto the Sully bridge where his tank was destroyed by German machine gun fire. Noble's FOO tank fell into the river and in a successful effort to save his comrades, Noble himself died.

After Lee presented the brief biographical sketch of Captain Noble, he posed three more Powerful Questions:
Our visit to Captain Noble's grave left us with many questions, all of which will require further research.

The Significance of Falaise to Canada's Second World War Experiences

Falaise was significant at the time because it allowed for control of major roads and railways. The town is still significant today because it sheds light on the experiences of soldiers that are becoming more and more relevant to us in the present.

In August/September of 1944, the question of whether Canada needed to force the home defence conscripts to serve overseas was pressing. This was much like the One Hundred Day Campaign in that the end of the war was in sight. By summer 1944, Canadians on the home front knew the full extent of the Nazi death camps and they knew that many European cities and towns were on the brink of starvation. Canadians felt Canada could not stop, and could not give Canadian soldiers a break a break. There is also overwhelming evidence that by fall 1944, Canadian soldiers were well aware of the Nazi actions - post battle interviews indicate that soldiers were motivated not by King and Country but by stopping the Nazis. Nevertheless, by this time, there was an epidemic of battle exhaustion. 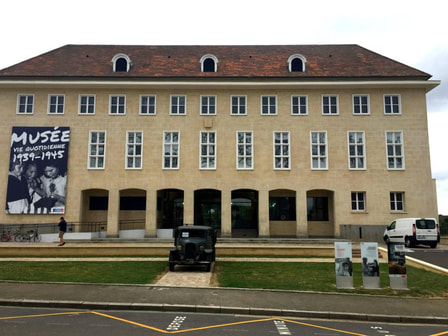 The recently opened Civilians in Wartime Memorial is a one-of-a-kind museum in that it details the experiences of civilians (as opposed to armies) during the Second World War. Specifically, the museum educates visitors about civilians' experiences during both the German occupation and the Allied liberation of France.

Following their visit to the Civilians in Wartime Memorial, Ronda and Vanessa were asked to reflect on their museum experience:
​

The Impact of the Normandy Campaign on France's Identity

Throughout the week, Cindy has asked us to consider the impact of the Battle of Normandy on France's identity. Abbi, Emily, and Mike shared their thoughts on the effects of the Normandy Campaign on France. 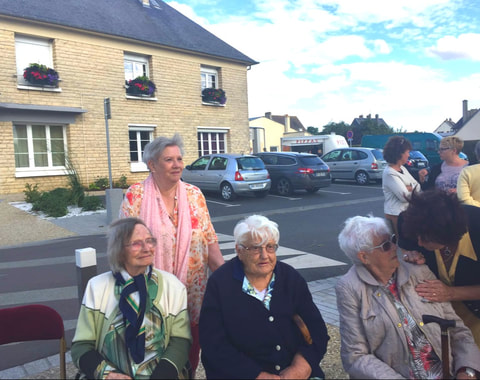 The three women sitting in chairs are Rocquancourt civilians who lived through the Second World War
Throughout the study tour, we have discussed the importance of creating  learning environments that enable students to openly share their ideas, opinions, and Powerful Questions. Below is a list of actions that teachers can take to create safe learning spaces, which in turn lead students to take chances and embrace vulnerability and messiness. 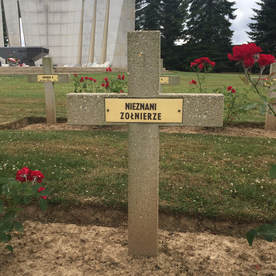 A few days following our visit to Urville-Langannerie, Marshall commented on how the Polish commemorate their war dead:

Our Visit With Our Canadian Cousins in Rocquancourt 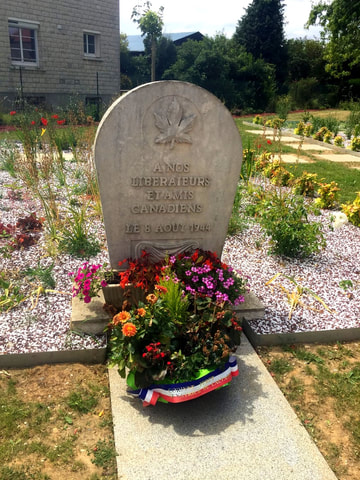 This monument reads "To our Canadian liberators and friends August 8, 1944"
This evening we had the privilege of visiting the village of Rocquancourt, a town with which Cindy, Blake, and Lee have built strong ties. During our visit, we met and conversed with three women who lived in Rocquancourt during the Second World War. Through them, we gained a greater appreciation of the hardships that French civilians endured - and the strength and creativity they demonstrated - during the German occupation of their homes.

Before we shared apéritifs with Rocquancourt's townsfolk, Denis Viel, the mayor, provided us with some background information about Rocquancourt.
Lorelei, who is bilingual, spoke at great length with the three Second World War survivors. Following our visit with our Canadian cousins, she shared the following reflection: 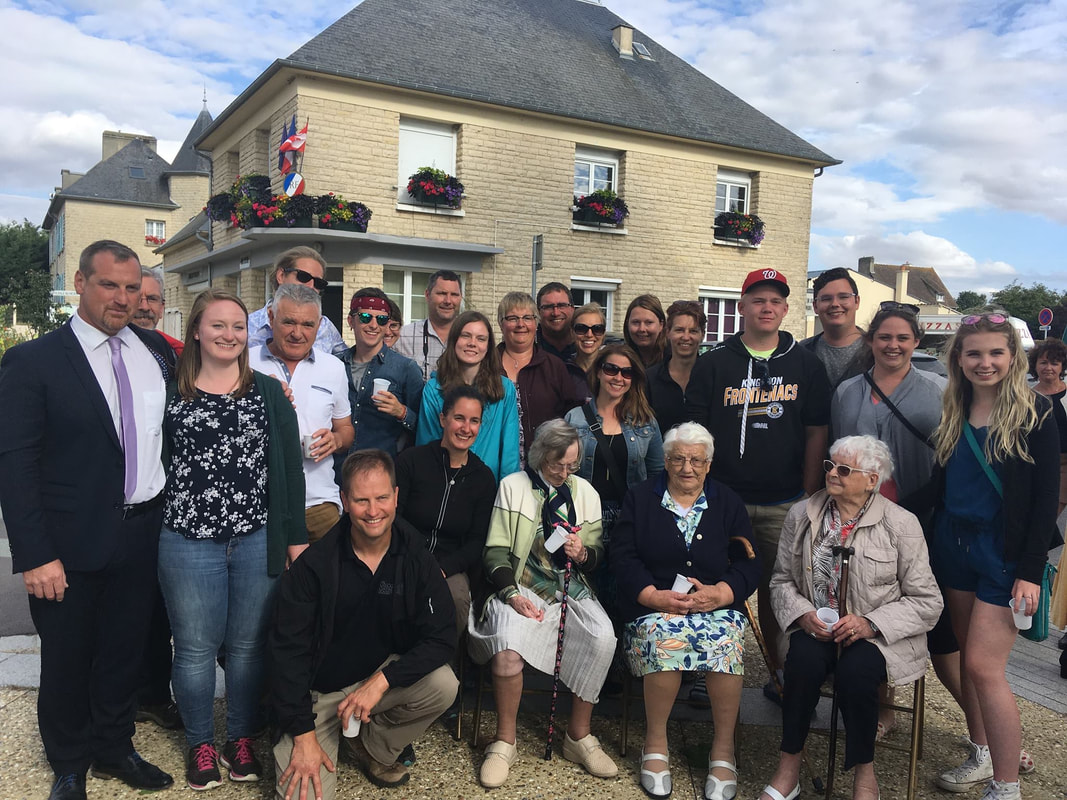 As a prelude to her seminar, Lynzee reflected on how connected she felt to the civilian experience described at the Mémorial des civils dans la guerre. She then facilitated a large-group discussion during which we shared responses to the question How can we connect better with our students so that they feel safe and feel as though their voices are heard?​.