"We want students to investigate and interrogate history." 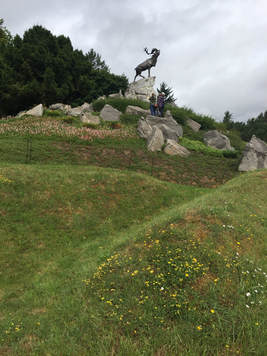 The Caribou Monument at Beaumont-Hamel
Today we challenged the dominant narrative that surrounds the Newfoundland Regiment's assault at Beaumont-Hamel on 1 July 1916. We also gained insights into the Battle of the Somme and its connection to the Battle of Vimy Ridge. Additionally, we had the opportunity to participate in two investigative exercises to learn how teachers can incorporate discovery learning into their teaching practices.

Today began with an hour and a half drive from Ieper/Ypres to the Picardie/Picardy region of France where the 1916 Somme Campaign took place. Our first stop was the Beaumont-Hamel Newfoundland Memorial Park. Our visit began with an investigative activity during which syndicates toured the memorial site with a critical eye. Half an hour later, the syndicates came together to share what they had noticed and wondered during their interrogation of the memorial park. After sharing, we discussed the different historical thinking concepts that are applicable to the park. Following this, Lee shared an evidence-based explanation of the reasons behind the events that took place at Beaumont-Hamel on 1 July 1916. Before leaving the Newfoundland Memorial, we visited Hawthorn Ridge Cemetery No. 2, where Vanessa presented her soldier biography.

Following our visit to Beaumont-Hamel, we drove to the Site du moulin à vent and the Tank Corps Memorial near Pozières, where we continued our discussion of the Battle of the Somme. Lee shared with us his perspective on the Canadian Corps' contributions during the September 1916 Battle for Courcelette. He and Blake also detailed the interconnectedness of the 1916 Battle of the Somme and the 1917 Battle of Vimy Ridge.
​
Our final stop of the day was Ablain-Saint-Nazaire. While there, we completed a second investigative exercise. We examined different aspects of both the Nécropole nationale de Notre-Dame-de-Lorette and the Mémorial international de Notre-Dame-de-Lorette. After this small-group activity, we came together to share our discoveries. We then learned of the geological, geographical, and strategic advantage of the Lorette Spur and the connection of the Lorette Spur to the Battle of Vimy Ridge. Before leaving Notre-Dame-de-Lorette for Arras (our home base for two nights), we participated in a seminar led by Vanessa.

Key Points to Consider About the Somme Campaign 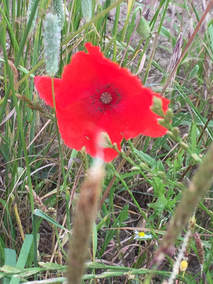 A poppy on the Somme
Today we learned that 1 July 1916 - the first day of the Battle of the Somme - was the single worst day for the British during the First World War. The question of Why the Somme? stands among the most controversially issues of the war. Lee asked us to consider the following information when thinking about the reasons for the Somme Campaign:

The Battle of the Somme was part of a general Allied European offensive between France, Russia, Italy, Great Britain, and these European powers' dominions. However, the Germans' attack at Verdun disrupted plans, thereby creating concerns of the potential collapse of France. The British group of Armies had to take over more of the burden of the operation, and before their desired forces and munitions were ready in sufficient quantity.​

Lee then posed the following questions:

The Newfoundland Regiment at Beaumont-Hamel: The Dominant Narrative 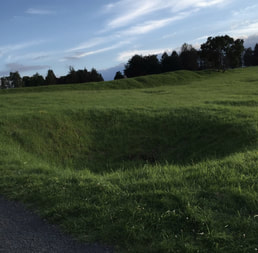 When asked for their thoughts on the purpose of the dominant narrative surrounding the Newfoundland Regiment at Beaumont-Hamel, Lee and Mike reflected and responded as follows:
​Blake drew our attention to the fact that by presenting only one narrative and leaving out the voices of the other units on the Somme, teachers prevent students from developing and defending their own perspective. He went on to suggest that teachers give their students the opportunity to conduct research on different perspectives of the Somme Campaign and then use primary source evidence to develop their own narratives. 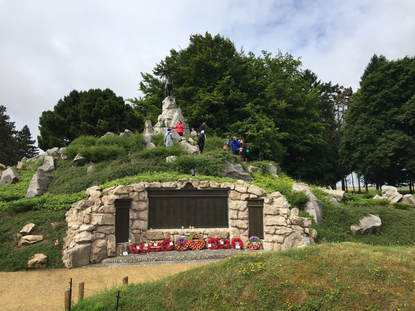 ​After reflecting on her experience at Beaumont-Hamel, Emily shared the following: 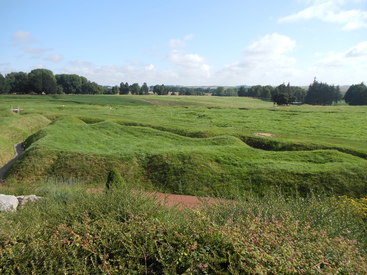 Visitors to Beaumont-Hamel can see British trenches (foreground), No-Man's-Land, and German trenches (in front of tree line)
During our large-group discussion following the investigative activity, we determined that the following historical thinking concepts are all evident at the Beaumont-Hamel Newfoundland Memorial:

During our investigation of Beaumont-Hamel, we saw that historical events can be used to teach concepts in other subject areas. For instance, mathematics, physics, and chemistry are all relevant to the study of the artillery that was used at Beaumont-Hamel.

Key Points To Consider About the Canadians on the Somme

When we arrived at the Moulin à vent and the Tank Corps Memorials, Lee led a discussion about the Canadian Corps' contributions to the Somme Campaign during the September 1916 Battle for Courcelette. He shared the following information:

The Canadian Corps transitioned from Belgium to the Somme following a rest after the Battle of Mont/Mount Sorrel. The Canadians took over from the Australians with the goal of continuing the war of attrition. During the Battle for Courcelette, the Canadians' objective was to take the Germans' first and second line positions. All four divisions of Canadian Corps fought together, implementing new battle tactics such as the creeping barrage and the use of tanks. Despite the 24,000 casualties, the successful attack on the German stronghold of Courcelette is considered to be one of the best successes of the Battle of the Somme.

In fact, Canada earned a reputation as an exceptional fighting force during the Battle for Courcelette and following the battle, Prime Minister Robert Borden was invited to the Commonwealth Conference in September 1916. This was the first time a Canadian prime minister had been invited to this conference. This leads to the question Why is the Battle of Vimy Ridge considered the defining event in Canada's coming of age?

In preparation for our visit to Vimy Ridge tomorrow, we visited the Nécropole nationale de Notre-Dame-de-Lorette in Ablain-Saint-Nazaire. This site, which is also known as Ablain St.-Nazaire French Military Cemetery, sits on a First World War battlefield near Arras. The memorial site was completed in the years following the First World War. It commemorates France's 45,000 combatants who fell in the Arras sector between October 1914 and September 1915. It includes a basilica, a cemetery, an ossuary, and a museum. We spent an hour at Notre-Dame-de-Lorette, exploring terrain, examining the different aspects of the site, and discussing the possible intent of the site.

While we were interrogating the Nécropole nationale de Notre-Dame-de-Lorette, we also had the opportunity to visit the L'Anneau de la mémoire. Built almost 100 years apart, both the Nécropole and the L'Anneal have very different looks, feels, and intents.

The following is what Ben and Lorelei shared after reflecting on the two sites: 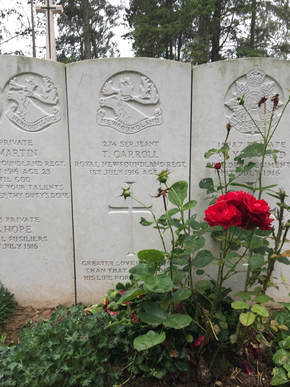 "While preparing Sergeant Carroll's biography, I researched his soldiering experiences as opposed to the battles he fought in. Since I am interested in learning about the day-to-day experiences of First World War soldiers, I was highly engaged in my research and I came to regard Sergeant Carroll as a family member. Presenting his life in the form of a diary entry also brought me very close to him. Consequently, when I found his grave at Beaumont-Hamel, I was deeply moved and felt that I had been reunited with an ancestor.

Beaumont-Hamel is very dear to me, as I worked as a battlefield guide there in 2012; therefore, I would like to know the story behind every soldier buried there.It was an honour to present Sergeant Carroll's life on the battlefield where he fell on 1 July 1916.  During my presentation, I  wondered whether Sergeant Carroll had in fact lied about his age to be eligible to enlist in the Newfoundland Regiment. I also wondered what was actually going through his mind the hours leading up to zero hour. Mostly, however, I wondered whether his family was at the front of his mind, just as he was at the front of mine. I will never know Sergeant Carroll's thoughts; however, I am eternally grateful to him and his comrades, who fought and fell so that Newfoundlanders and Canadians could live safe and prosperous lives.

Rest eternal grant them, O Lord; and may light perpetual shine upon them."

To conclude the day, Vanessa facilitated a seminar during which she posed the following questions: ​
After posing these two questions, Vanessa opened the floor to the high school students. After they had the chance to share their responses, she asked teachers to share their thoughts on these questions.