France and Flanders 2017
Day 7: Dieppe 1942
"Why do we spend so much time on the Dieppe Raid in our History classes when it lasted only 8 hours?" 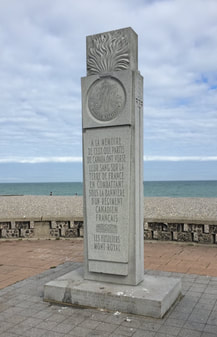 The Dieppe Memorial commemorates the French Canadian regiment Mont-Royal Fusiliers
Today we gained a deeper understanding of the August 1942 Dieppe Raid. Specifically, we challenged the dominant narrative of the raid and discussed how best to address the raid in our classrooms.

We began the day on Dieppe's beach. After each of us shared a word that we feel captures the essence of Dieppe, Lee shared some information about the raid and Cindy had us consider the impact of the assault on civilians. This led into a discussion about whether the assault on Dieppe was necessary. Following the discussion of military necessity, Blake explained some of the pitfalls teachers and students face when they study the assault on Dieppe. Before leaving the beach, Blake and Lee led some participants through a Tactical Exercise Without Troops (TEWT).

After completing our discussion about the Dieppe Raid, we visited - and some of us purchased French delicacies - at the Dieppe Market. Following this, we packed our kit into the vans and drove to the Dieppe Canadian War Cemetery where Abbi and Marshall shared the lives of the soldiers they researched. Before leaving the cemetery, Abbi facilitated a seminar during which we discussed how to teach students about the Dieppe Raid.

After lunch, we drove southwest to Bayeux, which is located in the Calvados region of Normandy. Upon arriving there, we picked up groceries and then drove to and settled into the Moulin Morin, our home base for the next six nights.

Important Points to Consider About the 19 August 1942 Dieppe Raid

leaders were in meetings, German Armies were driving deep into the Soviet Union towards the Caucuses oilfields, south of Stalingrad.

The Canadians who landed at Dieppe knew the tactical and operational purposes of the Dieppe Raid. In other words, they knew their purpose and function during the assault at Dieppe and they understood how their actions fit into the joint air, sea, and land mission. However, the Canadian units that landed at Dieppe did not know the exact strategic and geo-political purposes of the assault, because if these purposes had ever been unveiled to the Germans, the effects would have been devastating. Nevertheless, at the time, there was much talk in the Western world, including in the newspapers, about the need to open a second front and take other action to assist the Soviets.

The Dieppe Raid was intentional on different levels:
The YouTube videos below provide further insights into the August 1942 Dieppe Raid. Throughout this two-part video series, Dr. Terry Copp, one of Canada's leading military historians, provides in-depth information and poses thought-provoking questions about the assault on Dieppe.

Was the Dieppe Raid a Military Necessity?

After gaining some background knowledge about the Dieppe Raid, we brainstormed the following reasons for and against the raid:

Why does the Dieppe Raid receive so much attention in History curricula? 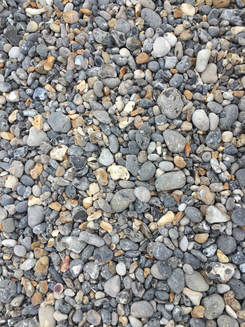 Dieppe's beach is rocky
Despite the fact that the Dieppe Raid lasted only eight hours, it makes its way into History textbooks and other secondary sources. Abbi, Janelle, and Kathryn shared their thoughts as to why this might be:

While on Dieppe's beach, Blake explained that presentism is the practice of thinking about an event from a hindsight point of view. He advised that when thinking historically, it is important to refrain from practising presentism. He went on to suggest that to avoid presentism, teachers and students must consider the political, economic, and social situation during the period that the event took place. Studying primary source evidence helps teachers and students understand historical events in context.

After Abbi and Marshall's soldier biographies, Abbi led a large group discussion during which we pondered and shared responses to the following questions: