France and Flanders 2017
​Day 9: Juno Beach 1944
"How a teacher responds to a student's response will shift the entire class' response." 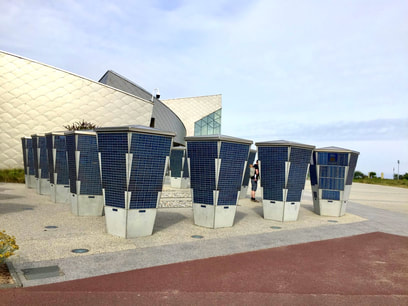 When we arrived at Juno Beach, we formed syndicates to begin an inquiry-based project that involved us formulating responses to a series of Powerful Questions.

We began working on the project immediately. We spent half an hour interrogating Juno Beach. We then drove up the road to the Juno Beach Centre, where we spent an hour viewing the exhibits and investigating the grounds.

Our day continued with a brief stop for coffee in Bénouville, which is where Pegasus Bridge and Café Gondrée are located. Pegasus Bridge, which stretches across the Caen Canal, is significant because British troops successfully captured it early in the morning on D-Day. Café Gondrée is a tourist attraction because the café's building was supposedly the first house to be liberated during the Normandy Campaign.

Our final stop of the day was Ranville War Cemetery where Lorelei presented a biographical sketch of her soldier. After her presentation, we returned to the Moulin Morin. Before we dispersed for the evening, Joel facilitated a seminar that caused us to think critically about Canada's role in D-Day and the Normandy Campaign.

While we were exploring Juno Beach, Cindy and Lee drove to a number of shops in an attempt to purchase maps of Normandy for syndicates to use throughout the week; however, they had no luck. They discovered that GPS and Smartphone map applications (e.g. Google Maps) are causing maps to become obsolete.

After we discovered that paper maps are difficult to find, Ronda, who loves maps, reflected on their usefulness:

After interrogating Juno Beach, we continued our investigation into Canada's experiences during the Normandy Campaign by going through the Juno Beach Centre's exhibit halls and exploring the grounds, which include memorial plaques, a sculpture, concrete fortifications, and a section of Juno Beach.
When asked for their impressions of the Juno Beach Centre, Jessica, Lorelei, and Lynzee shared the following thoughts:

Joel facilitated a lively large-group discussion after posing this series of thought-provoking questions: