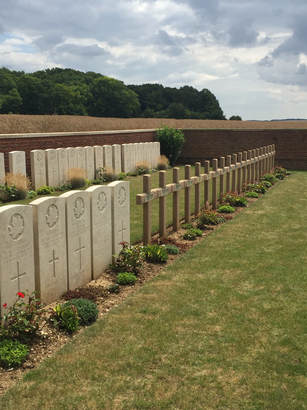 Following breakfast, we packed our gear into the vans and drove from Arras to a field located between Cambrai and Bourlon. On the way there, we crossed over the Canal du Nord and passed the Dury Canadian Memorial, which commemorates the Canadian Corps' attack of Arras, its capture of German lines, and its breach of the Canal du Nord in August/September 1918. When we arrived at the field, we spent a few minutes investigating the terrain. Following this, Lee shared his insights into Canada's role during the final days of the First World War (also know as the Hundred Days Offensive). Before getting back in the vans, Cindy asked us to consider the First World War's impact on civilians. Blake also spoke briefly about assessing students in History class.

Our second and third stops of the day were Crest Cemetery and Hangard Wood British Cemetery where Lee and Lynzee presented their soldier biographies. Before heading north to Normandy where we began examining the Second World War, Zakk facilitated a seminar during which we discussed the beginning of the end of the First World War.

Our drive to Normandy was about three hours in length. Before arriving at our final destination of Dieppe, we stopped at Puys, a nearby fishing village. As we approached Puys' rocky beach (﻿Plage-Baignade Puys﻿), we noticed a memorial to Canadians. Upon examining it, we discovered that it commemorates the Royal Regiment of Canada's actions during the 19 August 1942 Dieppe Raid. Following an interrogation of Puys' beach, Lee briefly explained his perspective on the significance of Puys during the Dieppe Raid.

After leaving Puys, we drove a short distance to Dieppe, our home base for the night. Before dispersing, Cindy asked that while exploring Dieppe, we keep an eye open for evidence of Canada and Dieppe's longstanding connections.

During our first stop of the day, Lee explained some interesting facts about Canada and the Canadian Corps during the final years of the First World War:

Do wars end for civilians? 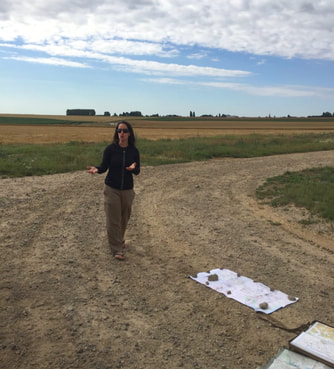 Cindy leading a discussion of the First World War's impact on civilians
Following Lee's talk, Cindy gave a brief description of the humanitarian disaster that resulted from the First World War. For example, she explained that the war made entire regions uninhabitable and that it took many years for towns and cities to rebuild. She also posed the question Did the First World War end for those living along the Western Front?.

After some reflection, Alex, Lorelei, and Vanessa shared their responses to Cindy's question:

Films as a Teaching Tool 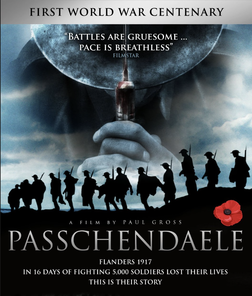 There are many historical dramas and documentaries about the First World War and the Second World War. Paul Gross' Passchendaele, Steven Spielberg's Schindler's List, and Pascal Vuong's D-DAY: NORMANDY 1944 are just three of many examples. Blake shared with us how films can be used effectively in their teaching.

Students watch (part of) a film and then conduct primary source research to determine whether the events and people depicted throughout the video are based on evidence. Teachers can take this project a step further and ask their students to use evidence to rewrite the less historically-accurate parts of the film.

Another possibility is to have students consider the questions Whose voice is heard? and Whose voice is missing? while they watch the film. They can also ask their students to rewrite the script from a different group's perspective.

The Significance of Puys 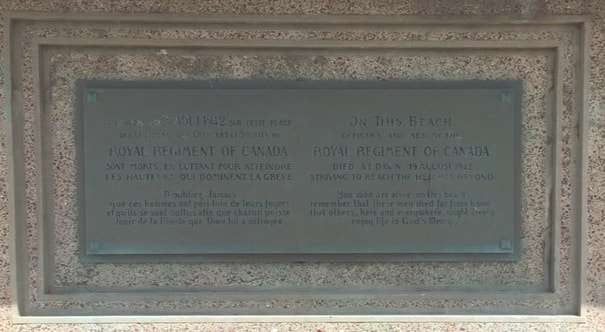 This plaque commemorates the Royal Regiment of Canada

Normandy and Canada: An Enduring Connection

During our exploration of Dieppe, we discovered plaques and monuments that demonstrate the centuries-old connection between Normandy and Canada. We came across a plaque commemorating the Filles du roi, French women who voyaged from France to present-day Canada in the seventeenth century to marry the French settlers of New France. We also discovered the Square du Canada (Canada Square). Located directly beneath the Château de Dieppe, the Square du Canada features a monument that commemorates the ties between Canada and Normandy. The square also includes a plaque that commemorates Canada's actions in the August 1942 Dieppe Raid.

Before we left the Hangard Wood British Cemetery, Zakk conducted his seminar. After Zakk posed the questions below, he facilitated a circular group discussion.